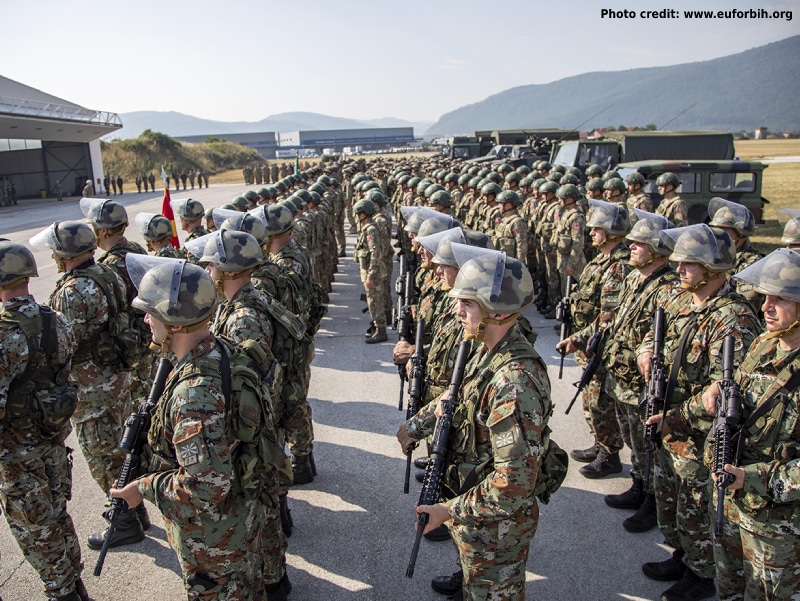 The military exercise EUFOR Quick Response 22 within Operation Althea in Bosnia and Herzegovina commenced on October 17, and will last until November 20, 2022. Twenty national contingents comprising some 2,000 soldiers will partake in numerous activities of the practically month-long drill. As announced by EUFOR, tactical exercises and patrols will aim to show the Balkan and global audience that the EU operation has the capacities and determination to contribute to maintaining a stable and safe environment. However, due to changes in Europe’s security structure conditioned by the Russian aggression against Ukraine and the fact that the operation’s term will expire in just a week, the question arises whether the Quick Response 22 exercise is the last exercise of the forces joint under the EU flag in Bosnia and Herzegovina.

One should first keep in mind that various drills, exercises and training have regularly been organised within the abovementioned EU operation in a similar manner since 2004, when the NATO SFOR mission was replaced by EUFOR Althea after Resolution 1575 of the United Nations Security Council (UNSC) entered into force. Although the NATO mission initially numbered around 60,000 soldiers in 1995, in the first days of its term, EUFOR had only 7,000 members at its disposal. The reduction in the quantity of military equipment and the number of personnel was conditioned by a relative stabilisation of the security situation in the region. The current number of Operation Althea participants ranges between 3,500 and 4,000, 1,100 of which are officially deployed and active on the territory of Bosnia and Herzegovina.

In the dispute between East and West

A few months prior to the onset of the Quick Response 22 exercise, Operation Althea headquarters announced that the number of servicemen and servicewomen in Bosnia and Herzegovina would be increased due to the escalation of the conflict in Ukraine. Thus, in addition to approximately 600 participants, EUFOR deployed an additional 500 soldiers. On the one hand, this was greeted as positive news, primarily because of the opinion that only international forces can successfully maintain peace, security and the implementation of the Dayton Agreement, which is based on Annexes 1-A and 2 of the Agreement referring to the institutional resolution of Bosnia and Herzegovina issue. The news on the increase in the number of deployed EUFOR soldiers was, on the other hand, met with negative criticism coming from a part of the population which believes that the time has come for the international forces and their representatives to return to their native countries after almost 27 years since the end of the war in Bosnia and Herzegovina. Along with the ongoing war in Ukraine, the divided and virtually antagonistic opinions of the citizens represent one of the reasons this year's exercise is different from the previous ones. Ethnic tensions and disagreements present among the political elite in the country for years seem to have further escalated and created a problem after the entity and general elections in early October. Personnel changes within the Presidency of Bosnia and Herzegovina will almost certainly not affect the attitude of the representatives of all three constituent nations towards the core issues, such as Euro-Atlantic integration, joining NATO or the Russian invasion of Ukraine.

It is, hence, crucial that at least a social consensus on the issue of EU accession exists. However, it seems that divisions based on political, ethnic and religious grounds have also left their mark on the question of the future European path and potential membership of Bosnia and Herzegovina in the European Union. According to various surveys, the Federation of Bosnia and Herzegovina residents are far more approving of this process than those living in the Republika Srpska. Data analysed by the Directorate for European Integration of the Council of Ministers in 2019 suggests that 86.5 per cent of citizens in the Federation of Bosnia and Herzegovina support the European integration process. On the other hand, judging by the results of the opinion poll conducted in May 2022 by the Faculty of Political Sciences in Banja Luka in cooperation with the Enterprise Development Agency (Eda), only 29.6 per cent of surveyed residents of the Republika Srpska would unconditionally support the process of joining the EU, regardless of the decisions of the Republic of Serbia. These figures indicate that entity citizens’ approval of the accession process has diminished markedly, especially considering the data published in 2019 by the Directorate for European Integration of the Council of Ministers. Three years ago, public support for the process was twice as solid, with 58.9 per cent of residents encouraging accession. Based on the mentioned evidence, as well as the fact that the Republika Srpska authorities promote foreign policy relations with the Russian Federation, it is clear why the EU accession is not as endorsed anymore.

The explanation as to why the Serbian member of the Presidency of Bosnia and Herzegovina opposed the imposition of sanctions against Moscow stems from political marketing, media campaigns and presidential visits to Russia. Although Bosnia and Herzegovina introduced sanctions to the Russian Federation in early June and thus officially condemned its recognition of the Donetsk and Luhansk People's Republics, cyber-attacks on official institution platforms and numerous issues related to the activities of the Russian Armed Forces in Ukraine, the sanctions were seemingly not realised after all. Even though it might seem at first that the war between Russia and Ukraine is far from the borders of Bosnia and Herzegovina, this conflict, Russian influence on the Republika Srpska and the unstable situation in the country may currently be singling out the Balkans and Bosnia and Herzegovina as the second neuralgic point in Europe. Although this country is yet to be awarded the status of an EU membership candidate, Brussels officials still consider Bosnia an area of ​​significant importance for their vital interests. Accordingly, Belgium strives to strengthen both the positive public opinion towards the accession process, primarily among the Croat and Bosniak population in the Federation of Bosnia and Herzegovina, and the approval of Operation Althea itself. Moscow officials share a virtually identical attitude, especially regarding the Republika Srpska. Besides the Republic of Serbia, the Republika Srpska is the only entity in Europe that opposes the introduction of sanctions against Russia, which creates manoeuvring space for Moscow to spread its influence.

Acceding to NATO is another crucial issue with no basic social consensus. The attitudes of the representatives of the constituent nations and the general population towards joining NATO are based precisely on the previously established ethnic and political divisions, as well as the entity's foreign policy orientation. In May 2022, as many as 68.2 per cent of the participating citizens of the Republika Srpska expressed unconditional resistance towards joining the Alliance, which represents a 5 per cent increase compared to the data from September 2021. Banja Luka officials, who are decidedly against joining the Alliance, share the negative attitude of citizens towards NATO. On the other hand, in the past few years, more than 50 per cent of the citizens of the Federation of Bosnia and Herzegovina have been in favour of this process. With the authorities coming from the Federation, it is clear that the representatives of all three constituent nations cannot come to a unanimous decision on any issue of importance.

The (un)certain fate of EUFOR

As it is hence crystal clear that neither a social nor a political consensus can be reached on any crucial matter in Bosnia and Herzegovina, crises and tensions are expected to occur more frequently in the future. At this moment, one of the central issues could probably refer to the fate of Operation Althea. As previously indicated, the operation term expires at the beginning of November, and its extension will be discussed at the UNSC meeting on November 3. The question thus arises: is it realistic to suspend the EU's most enduring land operation, and to what extent?

Two standpoints can influence the answer to this question, the first of which is related to global events. As the conflict in Ukraine has fully disrupted the relations between Moscow and the West, the possibility of Russia using their veto right to stop the EUFOR term extension should not be rejected. Based on all previously mentioned facts, that action would not benefit the Russian Federation in any case for several reasons. The Dayton Peace Agreement, in which NATO is incorporated, is just one of them. By activating the veto power in the UNSC, Russia would downright lose the opportunity of institutionally (in this case, through the UNSC) getting involved in events in Bosnia and Herzegovina and would thus once again make NATO a key stakeholder in the issue. Namely, in accordance with the Dayton Agreement, countries that are not members of the Alliance and are currently part of the EUFOR operation (Chile, Switzerland and Austria) are expected to withdraw their troops, which would provide a reason for NATO to initiate a new mission. This mission would probably comprise the same contingents currently present in Bosnia, so there would be no genuine changes except for possible new emblems and markings on the uniforms.

From NATO's perspective, on the other hand, the withdrawal of Operation Althea could potentially worsen the Serbian population’s attitude towards the Alliance, which would certainly not result in a reduction of tensions or an accelerated accession process. On the contrary, it could conceivably lead to new disagreements and additional friction in the already unstable Bosnia and Herzegovina. In that case, the question of whether the new NATO mission would have the same powers as EUFOR should also be considered, seeing that Althea is the only field operation conducted by the EU that has the right to utilise force in case of defence, as well as to issue threats to attack. Bosnia and Herzegovina would, in such a situation, no longer be considered a frozen conflict but would instead become an area where the fear of a new conflict and potential escalation of existing friction could largely be justified.

The second standpoint could be related to the interior situation. If the international influence is disregarded, it is clear that the deep polarisation of the society in Bosnia and Herzegovina will by no means be diminished. It is thus pivotal that this, for many people neutral, mission remains active. In case of mounting tensions, the protection offered by the international forces would seemingly be of great importance to all nations, especially if a delicate topic such as ethnic tensions is taken into account. This is precisely why neither side should worry about the increased number of soldiers at Camp Butmir, especially during the military exercise, since such a vast number of participants are only currently engaged. Activities envisaged by the drill also incorporate local structures, such as cities and municipalities, which will respond to all challenges, risks and threats in the future in rural and urban areas alike in coordination with other institutions.

Therefore, if internal and external factors are considered, it seems that Bosnia and Herzegovina’s current status would only be maintained by extending Operation Althea’s term, which would, in turn, guarantee peace and security to all its citizens. Any other decision made by a stakeholder would account for a step closer to initiating a new conflict on European soil. 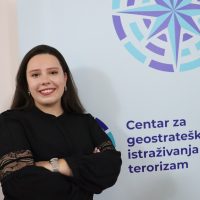