Relations in the MENA region: Iran and Iraq 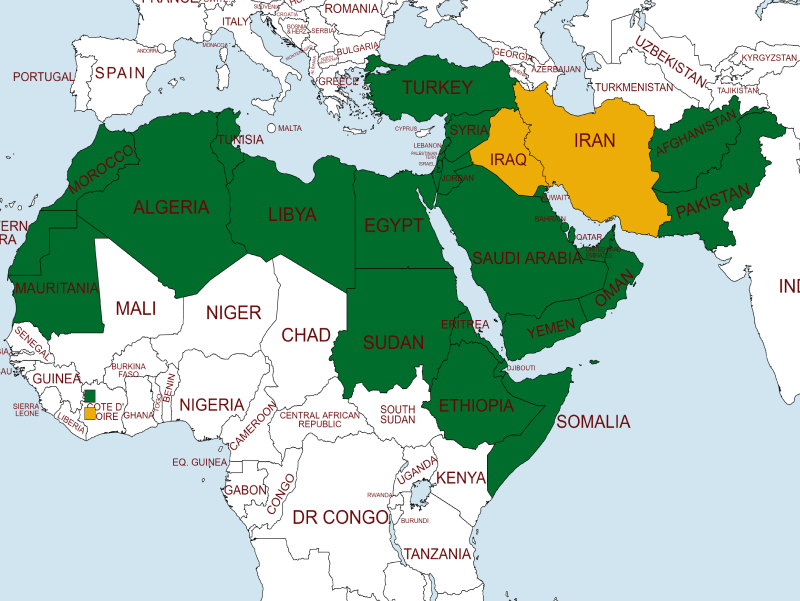 The Islamic Republic of Iran and the Republic of Iraq have historical ties that go back hundreds of years and share an ancient cultural and religious heritage. Despite periods when the authorities of the two countries conflicted, the link between the two nations has not disappeared, but is still clearly visible today and has an immense impact on the economic, political, and security situation in the region. The relationship between Tehran and Baghdad will most likely be even more intense in the coming period, taking into account the announced withdrawal of the United States from Iraq and the fact that Baghdad is the mediator between regional rivals - Iran and Saudi Arabia - during negotiations that began earlier this year.

Despite tensions between the two neighbors after the Iran-Iraq War (1980-1988), in the wake of Saddam Hussein's fall in 2003, and pro-Iranian Shiite groups coming to power, bilateral relations were re-established. Rigorous sanctions and isolation that Iran has faced in the past have led to the establishment of extensive economic cooperation between Tehran and Baghdad, so it’s no surprise that from 2010 until today, the two countries have signed more than 100 economic agreements.

After the outbreak of the Syrian war and the initial withdrawal of US troops from Iraq in 2011, due to the unstable situation and deep divisions on the Iraqi political scene, the Islamic State (IS) managed to form a stronghold in Mosul. As a result, Iranian and Iraqi authorities started to cooperate in the field of security as well, supporting each other against the IS. Thus, since 2014 Tehran has been providing military assistance to Baghdad, mainly in the form of logistical and air support.

The Iraqi Shiite government is in a much more subordinate position than Iran, and without Tehran’s support, Baghdad has no great chance of survival. Iraq is not only struggling with religious antagonism between Sunnis and Shiites, Kurdish separatist passions, the consequences of the American invasion, and the presence of Islamists, but it is also facing accusations of corruption and mass protests in the past few years. Nevertheless, Iranians are aware of Baghdad's struggles and it seems that this turmoil suits them.

Iran doesn’t want to face another threat from Iraq like the one from the time of Saddam's reign. With that in mind, Tehran will certainly continue to support Shiite actors in Iraq to prevent the re-creation of a strong secular Sunni state led by a government that could establish good relations with Riyadh or the West. Such a scenario would further complicate Iran's position in terms of energy exports, as it is already a relatively poor country due to corruption and economic sanctions that hinder further industrial modernization and prevent foreign investment. On the other hand, Tehran would also never allow the formation of a strong clerical Shiite government, as there would be competitiveness between religious circles, with the powerful Shiite Iraqi centers of Najaf and Karbala eventually providing alternative theological sources to Qom (Iran's religious center).

However, a too fragile Iraqi central government plagued by ongoing civil strife or fragmentation would be even more dangerous to Iran's security and economic interests. This is supported by the fact that about 10% of Iran's population is a Kurdish minority, which in the event of recognition of Kurdistan, together with the Turkish and Syrian minorities, would probably rebel, and potentially unite and form a country with access to the Mediterranean. Due to the geographical position they occupy, this scenario would be most beneficial for the Iraqi Shiites, since their part of the state is not only the richest in oil, but is connected with the whole world through ports. For that reason, it is unlikely that Tehran will allow the division of the country, because, as already mentioned, it does not want a strong rival Shiite state in the neighborhood.

In the past ten years, driven by the desire to establish regional hegemony, Iranians have successfully used the Iraqi territory as a buffer zone against rival Saudi Arabia. That way Riyadh’s influence or possible support for Sunni actors near Iranian borders is limited. Moreover, the Iraqi territory represents a bridge to Iran's largest regional allies and interest spheres. To be specific, it makes it easier for Iranians to spread their influence not only in Syria, which is led by Alawite (Shiite) president Bashar al-Assad, and in Lebanon, where Iran's largest Shiite ally Hezbollah is based, but also in Israel. The existence of the Israeli state, which is Tehran's biggest enemy, is constantly threatened by rebel groups in Gaza and the West Bank, which Iran supports through secret channels.

Hence, it is clear that keeping Baghdad in its sphere of influence and maintaining Iraqi territorial integrity is one of the key foreign policy issues for Tehran. In essence, Iran would like for Iraq to be a friendly neighbor that poses no threat to its theocratic regime in security, political, or economic terms. Specifically, the Islamic Republic of Iran wishes to maintain the status quo. It wants a more or less stable country, whose government can be manipulated and whose religious influence can be limited, i.e. a united country that cannot compete but can be used to further expand Iranian influence in the region. Accordingly, now that Americans have announced their departure from Iraq and are showing less interest in the Middle East, Iran's aspirations are quite realistic and sustainable.

As for negotiations regarding the normalization of relations between Iran and Saudi Arabia, in which Iraq acts as a mediator, it is unlikely that the formation of a shaky economic alliance between Tehran and Riyadh will change the Middle East geopolitical situation in the long run because of their conflicting interests and policies all over the region. Therefore, more intensive communication between Iraqi officials and representatives from Iran and Saudi Arabia can be expected during the talks, but a significant change that could disrupt or alternate the current Iranian-Iraqi relationship certainly not.