Relations in the MENA region: Iran and Saudi Arabia 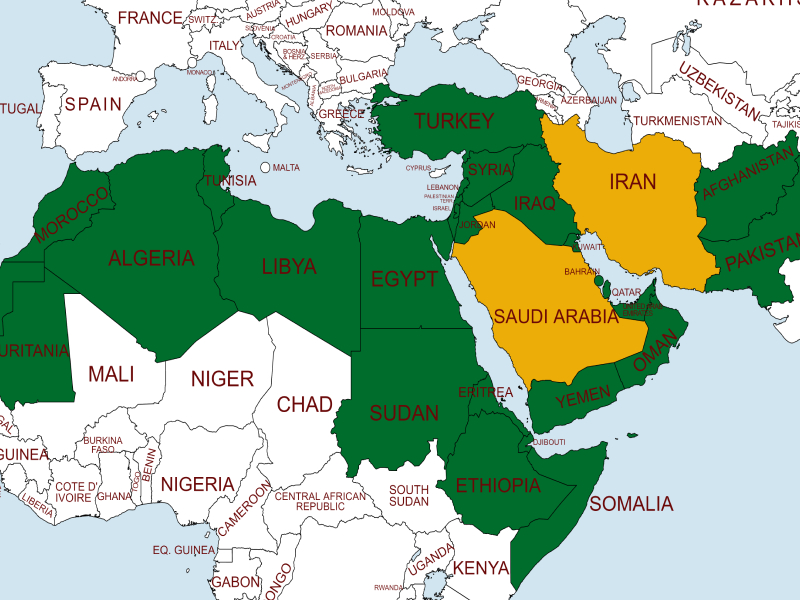 Sunni/Wahhabi Saudi Arabia, the birthplace of Islam, aspires to secure a leading position in the Muslim world, as does Iran, the largest Shiite country, located on the other side of the Persian Gulf. In addition to many existing conflicts in the Islamic community that stem from the 7th-century Sunni-Shiite divide, added tensions have arisen throughout the past twenty years. These strains were mainly caused by these two countries' aspirations for dominance, primarily economic and political, but also security, not only in the region but all over the Islamic world.

Iran and Saudi Arabia cut all diplomatic ties in early 2016. This happened after the execution of the very influential Shiite sheik Nimr al-Nimr in Riyadh brought about an attack on the Saudi embassy in Tehran. Nevertheless, it was reported earlier this year that relations between the two rivals could be normalized, and both sides expressed optimism about the negotiations. This sudden change in discourse is not surprising since oil essentially dictates the foreign policies of all countries in the Middle East, and through some kind of partnership with Saudi Arabia, Iranians could significantly improve their economic positions and avoid sanctions on oil sales. However, given the political, cultural, and religious gap between them, despite the goodwill they are showing, it is unlikely that any agreement will be sustainable in the long run.

In the past, the export of energy sources was one of the main reasons for a strained Iranian-Saudi relationship, as the economies of both countries largely depend on the oil and gas industry. The Kingdom of Saudi Arabia, the largest crude oil producer of OPEC, with its large reserves and a much smaller population of about 35 million citizens, has a greater interest in a long-term view of the global oil market and encourages moderate prices. In contrast, the Islamic Republic of Iran, an OPEC member as well, is home to about 85 million people and due to sanctions and a significantly lower standard of living encourages high oil and gas prices.

The Qatar diplomatic crisis (2017-2021) is one of the more recent examples which highlight the fact that their competitiveness is extremely strong in this field and that both sides are ready for drastic measures to protect their interests. Good and developed cooperation between Doha and Tehran, mainly due to sharing the world's largest liquefied natural gas (LNG) deposit in the Persian Gulf, was one of the main arguments of Saudi Arabia, the United Arab Emirates, Bahrain, and Egypt for imposing a land and air embargo on Qatar and for the complete severance of diplomatic relations. However, not only did Riyadh fail to limit Iranians’ influence in the Arabian Peninsula and make it harder for them to access natural gas, but it achieved the exact opposite - isolated Doha started to rely even more on Tehran. Examining this crisis from the current perspective, it seems the Saudis have realized that since they can no longer suppress Iran's influence so easily, they can at least profit economically from some sort of agreement, which explains their desire for dialogue.

In addition to the Qatar crisis, the situation in Yemen has indisputably contributed to Riyadh's desire to start negotiations with Tehran. Although Saudi Arabia has been fighting in Yemen for six years as an ally of the Sunni President Abdrabbuh Mansur Hadi, it has failed to achieve its goals and suppress the Shiite Houthi movement – a rebel group financially and logistically supported by Iran. The Saudi monarchy clearly wants to get out of the Yemeni war without admitting defeat but after a few failed peace offers to the Houthis, it seems Riyadh has no more ideas how to achieve that. Hence, establishing better relations with Iran or forming some sort of alliance may allow the Saudis to leave Yemen in a dignified way. This argument is supported by the fact that, according to sources familiar with the months-long dialogue between Iranian and Saudi officials, the conflict in Yemen is one of the topics of discussion.

Conflicting interests of the two theocratic governments are also visible in most countries in the region where they directly or indirectly support rival parties. With that being said, establishing relations could affect not only the Gulf and Yemen but also the entire Middle East – especially Iraq where the majority population is Shiite, or Lebanon where Iran’s biggest Shiite ally Hezbollah is located, as well as Syria, whose Alawite (Shiite) president Bashar al-Assad also enjoys Iranian support.

Furthermore, although Tel Aviv and Riyadh have not yet established formal ties, during the past few years various reports emerged alleging the existence of extensive diplomatic and intelligence cooperation between Saudi Arabia and Israel against their common regional enemy – Iran (which does not recognize the Israeli state as legitimate). Thus, an auspicious change in the relationship between Tehran and Riyadh may have a very negative impact on Israel-Saudi Arabia relations, as well as on the ties of other Arab countries with the state of Israel.

Religion as a factor

Conflicts between different religious denominations are a major problem for almost all countries in the Middle East and North Africa. The modern-day states of this region were formed within the artificial borders drawn by the European colonial powers, regardless of whether those lines made sense historically or were fair to different religions, tribes, and peoples that were suddenly gathered into a whole. Naturally, because of this, most governments in the MENA region either easily collapsed and lost control over parts of their land which were afterward manipulated by foreign powers like in the case of Syria, or are deeply divided and unstable like Lebanon. Iran and Saudi Arabia both consider themselves leaders in their version of Islam, so they choose allies and groups they support nominally based on religious denomination - the Saudis support the Sunnis, and the Iranians the Shiites.

This brings us to the religious factor of the Iranian-Saudi relationship, which is often exploited, so provocations that have a religious basis can regularly be heard in aggressive rhetorics of Iranian and Saudi officials. This tactic has served both sides well in the past, not only to increase antagonism between different religious groups but also to incite rebellious passions in the region.

In this regard, although at first glance it seems that Saudi Arabia is homogeneous and united under the Sunni iron fist of the House of Saud, in reality, it has its divisions. About 12% of the Saudi population are Shiites who live in the Eastern Province and sporadically rebel against Riyadh. This Shiite minority has been a target of political repression for many years. Even though the Saudi Wahhabi doctrine propagates the extermination of Shiite and Sufi "heretics", religion is not the only reason for their oppression. Namely, the biggest Saudi oil deposits are located in the above-mentioned province, so that region is of special importance for Riyadh and it will do everything to maintain complete control over this area. Given that this province, rich in oil and populated by Shiites, is located in the very east of the country - in the Persian Gulf just across Iran - Saudi Arabia's fear of Iranian influence expanding on to the Peninsula will certainly not disappear so easily even if they establish an agreement between them.

The Kingdom of Bahrain, which is located very close to the Eastern Province, serves as a good reminder to the Saudis, alongside the Houthis in Yemen, that Iranians can easily once again incite Shiite riots in the immediate vicinity. The fact that the Shiite protests in Bahrain after the Arab Spring in 2011 were so serious that Manama couldn’t solve the problem on its own and Riyadh had to intervene to quell the riots, confirms that the Saudis consider Iran Shiite influence a serious threat. So it’s no surprise that the Saudi monarchy is deeply concerned because of Tehran’s expanding impact in the region and the danger of Shiite rebellion possibly spilling over into its territory.

The future of the Iranian-Saudi relations

If the Islamic Republic of Iran and the Kingdom of Saudi Arabia re-establish diplomatic ties, it will likely only briefly ease tensions, just like in the past, as they have a lengthy road ahead and huge obstacles to overcome to achieve peace in the long run. In addition to harmonizing energy and foreign policy and putting religious differences aside, the most problematic and crucial security issue of Iran's nuclear program must be also resolved. Although this matter has not yet been addressed during the talks, Riyadh restated its concerns in early July regarding the increase of Iran's nuclear activities, stressing that the nuclear program is a serious security threat to regional stability. Therefore, it’s safe to say this particular topic could be another major barrier in reaching an agreement.

In any case, while some analysts believe that these negotiations will result in a vast geopolitical change in the Middle East, especially now when the US is withdrawing from Afghanistan and announcing its departure from Iraq, it is clear that Iran and Saudi Arabia are fundamentally different. Hence, their competition and mutual mistrust will not disappear so easily by re-establishing formal relations, reopening embassies, or striking a loose economic deal.