Relations in the MENA region: Oman as a mediator 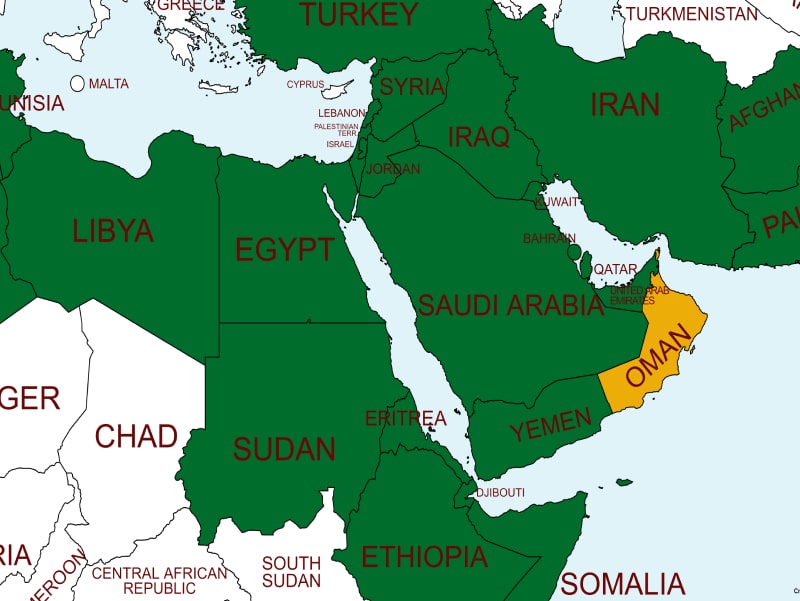 Despite being in one of the most unstable regions in the world, which is constantly burdened by tensions, turmoil, and conflicts, the Sultanate of Oman successfully pursues a policy of neutrality and skillfully manages the not so easy role of mediator in the Arabian Peninsula or often across the Middle East. Muscat was, and probably will remain, an important player in dialogues between regional actors, primarily Riyadh and Tehran, but also between Western powers and the countries of the Persian Gulf. Given the current situation in the MENA region, primarily negotiations that began this year, it is very likely that Oman will now be, as in the past, a voice of reason and a neutral link between the warring parties.

To fully understand the specific status Oman has secured for itself over the past few decades, it is necessary to consider its geographical location, the dominant religion in the country, historical connections and traditionally friendly relations with certain world powers, as well as the foreign policy pursued by the former sultan Qaboos bin Said al-Said.

Namely, Oman is the only country in the Islamic world in which the majority of the population belongs to the Ibadi school, which originated a couple of decades before the religious separation between  the Sunnis and Shiites. Even though the Ibadis strictly adhere to the Sharia law, their movement is one of the more moderate and tolerant, especially when it comes to other religions or divisions within Islam. This openness when it comes to religion, which separates this school from other Islamic movements, enabled Oman to avoid tensions and conflicts caused by the Sunni-Shiite schism, but also to cultivate good relations with all countries in the region based on similarities with both sides.

Although after gaining independence from the United Kingdom in 1951 Oman was isolated from the world and even from its neighbors, and had a turbulent period during the 1960s when it was affected by riots, civil war, poverty, and lack of modern government, in 1970 a change occurred. Omani culture and customs, intertwined with Ibadism, created a strong basis for the social and political development of the country. Sultan Qaboos bin Said used this to carry out fundamental political, economic, and security reforms, after gaining power in a coup against his father with the support of the UK.

From 1970 to his death in 2020, Sultan Qaboos pursued a moderate foreign policy, supported peace initiatives, and established diplomatic relations with all regional and many world powers. He especially nurtured close relations with London, because Oman, as already mentioned, has certain historical ties with the UK. In addition, he also maintained good relations with the United States of America. At the moment, it seems that his successor and cousin Haitham bin Tariq al-Said plans to pursue the same neutral policy and to work equally closely with the British and Americans.

When it comes to Oman's cooperation with the UK, it is most advanced in the field of security. In addition to the developed arms trade, a series of joint military exercises called "Swift Sword'' (Saif Sareea) was successfully undertaken by their armies in 1986, then in 2001 and 2018. In the same field, Oman has strong ties with the US since 1980, when it became the first country in the Persian Gulf to sign a formal agreement on military cooperation with Washington. In 2010 this accord was revised and renewed, and during 2019 Oman signed a Framework Agreement expanding US access to facilities and ports in Salalah and Duqm.

However, the fact that Oman's cooperation with the UK and the US is especially developed in the field of security is not a coincidence. The Sultanate of Oman is located in an immensely important strategic position. It borders Saudi Arabia to the west, the United Arab Emirates to the northwest, Yemen to the southwest, and has maritime borders with Iran and Pakistan. By cooperating with the authorities in Oman, the above-mentioned Western powers have a place to station their armies on safe ground and near their spheres of interest.

In addition, the Strait of Hormuz, which is located between Oman and Iran, is an extremely important location for international trade and one of the world's most strategically essential choke points. Between 20 and 40% of the world's oil and a third of the world's liquefied natural gas (LNG) pass through it. Therefore, it is in the interest of both regional and world powers that the situation in the vicinity is safe and stable, and that traffic is unhindered. In that sense, Oman is a very important factor, given that it shares control of the Strait of Hormuz with Iran, which does not have the trust of most regional actors nor the international community. Additionally, this region has recently become an area of interest for China due to its trade significance. As part of the Belt and Road Initiative (BRI), Beijing has invested 11 billion dollars in the Omani port of Duqm. Therefore, the Sultanate of Oman, due to its religion, neutral tradition, and its unique geographical position, cooperates not only with the entire Gulf but also enjoys the support of the US and the West on one hand, and the East on the other.

Since the Arab Spring in 2011, this specific neutral position of Oman has become even more pronounced. In the past decade, the authorities in Muscat maintained diplomatic relations with the regime of Bashar al-Assad and have not interfered in the Syrian war, nor the conflict in Libya, unlike its Gulf neighbors. Oman maintained the same principle concerning the civil war and Saudi intervention in Yemen.

Despite the constant danger of the conflict spilling over into Omani territory, like it did in the past, authorities in Muscat continue to maintain good relations with all conflicting parties and external actors involved in the Yemeni war, even with Iran, which is perceived by most Arab countries as a threat. It should come as no surprise that this Gulf country played an important role in the negotiations between the US and Iran, which eventually led to the signing of a nuclear agreement (Joint Comprehensive Plan of Action - JCPOA) in 2015. Following the official signing of the accord, then-Iranian President Hassan Rouhani praised Muscat's mediation efforts, as did the former US Secretary of State John Kerry, who said Oman did not only host several important meetings but played a key role in launching the talks between Tehran and Washington.

However, the biggest conflict within the Gulf Cooperation Council (GCC), i.e. the Qatar diplomatic crisis (2017-2021), best reflects Oman's unique position in the region. When Saudi Arabia, the United Arab Emirates, Bahrain, and Egypt imposed sanctions on Qatar for cooperating with Iran and supporting the Muslim Brotherhood, Oman took a neutral stand along with Kuwait. Muscat refused to join the anti-Qatari bloc, constantly insisting that the conflicting parties should resolve their issues and reach a solution through dialogue and diplomacy. During this (almost) four year crisis, Muscat remained steadfastly neutral, cooperating with the anti-Qatari bloc, as well as Doha.

Given all of the above, it is unlikely that the authorities in Muscat will change their foreign policy anytime soon. First and foremost, because in Oman’s immediate vicinity there are collapsed, unstable, and deeply polarized countries. All of them serve as a good reminder to Oman that due to its history, location, and tradition, it enjoys peace, stability, and a relatively good economic position, as well as an excellent reputation in the international community, which is a rarity in the MENA region. Hence, Sultan Haitham bin Tariq al-Said will undoubtedly strive to maintain an impartial position on regional issues, but also keep strong ties with both the West and the East. All in all, there is a chance that we will see Oman in the role of a mediator again soon if, as a result of the recent negotiations between Riyadh and Tehran, the issues of Yemen and the Iranian nuclear program are raised.