Relations in the MENA region: Saudi Arabia and Turkey 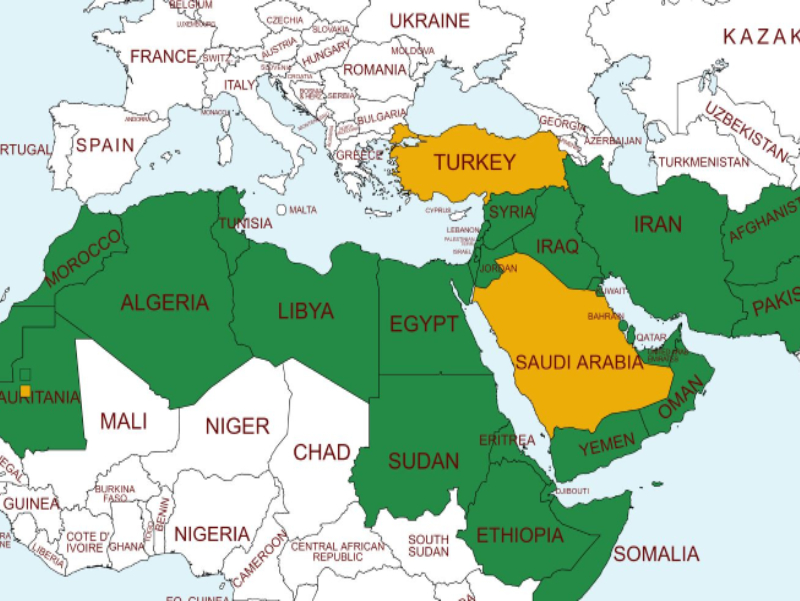 The Kingdom of Saudi Arabia and the Republic of Turkey have been bitter rivals for a very long time. Since the 19th century, these two peoples have had a complicated relationship, so it can be said they are historical enemies. Tensions between Riyadh and Ankara have risen in recent years, as best seen in proxy conflicts across the MENA region, through which they are vying for leadership in this part of the world. However, it seems that due to the recent change of dynamics in the Middle East and numerous negotiations held during the past few months between the regional forces, Saudi Arabia and Turkey show a desire for reconciliation, which can unequivocally lead to at least a reduction of tensions in the future.

Ever since the establishment of the Saudi monarchy by the al-Saud family, there has been mistrust between the Saudis and the Turks. The roots of this problem go back to the 19th century and the establishment of the first Saudi state. The Ottomans came into conflict with the al-Saud dynasty, which resulted in the execution of Saudi religious leaders and the disintegration of their state.

After the collapse of the Ottoman Empire, the al-Saud family managed to re-establish the state and lay the foundations for the modern Saudi Arabia that we know today. Mustafa Kemal Atatürk sought to preserve the integrity of his country after the losses suffered during the First World War and cultivate friendly relations with neighbors and the international community. In addition, Atatürk was not as interested in religion and Islam as the Ottomans, focusing instead on forming a modern secular state modeled on European ones.

Atatürk's foreign policy enabled the re-formation of Saudi Arabia in 1932, and formal ties between the two countries were officially established that very year. From that time until today, a lot of things have changed. Although the Saudis and Turks mostly supported the same parties in major conflicts and reacted more or less similar to the geopolitical turmoil in the world throughout the 20th century, there was a sudden change about ten years ago when their competitiveness re-surfaced.

After the outbreak of a series of demonstrations in 2011, Saudi Arabia and Turkey initially found themselves on the same side in the Syrian war, financing different forces against President Bashar al-Assad. However, very quickly their competitive foreign policies came to the fore and led to proxy conflicts across the region.

The Arab Spring and the Muslim Brotherhood

After the fall of Hosni Mubarak in Egypt in 2011, Turkey supported Muhammad Morsi, a member of the Muslim Brotherhood (MB), which is not surprising since Recep Tayyip Erdoğan has views similar to those advocated by this Islamist group. On the other hand, the Saudis consider MB dangerous for their regime and they treat this organization as one of the biggest regional threats. It is for this reason that they supported the military coup led by Abdel Fattah al-Sisi in 2013 that overthrew Morsi. This move by the Saudi monarchy, which was immediately condemned by the Turks, was the first sign of divergence between Riyadh and Ankara, caused by ideological differences.

The fact that in October of the following year Riyadh successfully prevented Ankara from becoming a non-permanent member of the UN Security Council is proof that the conflict over this organization is serious. Turkey lost to Spain and New Zealand in the competition for two vacancies reserved for the voting bloc called the Western European and Others Group (WEOG). Several diplomatic sources have since confirmed that this came as a result of the intensive campaign that Riyadh led against Turkey's membership in the Council.

Things got even worse in 2017 when Saudi Arabia severed diplomatic relations with Qatar due to the support it provided for the MB and other Islamist organizations in the region. Doha suffered certain economic consequences and was forced to quickly find alternative routes for the import and export of food and other products. Ankara, of course, came to the rescue and helped Doha economically. In addition, the Republic of Turkey has increased its military presence in Qatar as a sign of support. Although Ankara did not want a physical clash with Riyadh, but only symbolically enlarged the number of its troops in Qatar, the Saudis perceived this maneuver as a direct provocation.

Ankara's moves during the Qatar crisis can be interpreted as a plan to restore military and economic dominance along the eastern line of the Arabian Peninsula, from Oman to southern Iraq. Anyhow, it is evident that the Turkish government tried to use the crisis to its advantage, using its expansionist neo-Ottoman foreign policy at the expense of the Gulf Cooperation Council (GCC).

It is necessary to mention another big reason for the sudden increase in tensions between Riyadh and Ankara – the murder of the Saudi journalist Jamal Khashoggi inOctober 2018 at the Saudi consulate in Istanbul. Following the assassination, quite logically, Turkey not only played a major role in discovering and disclosing the perpetrators and their connection to Riyadh but also openly led a media campaign against the Saudi monarchy. This incident greatly affected the already damaged reputation of Saudi Arabia in the international community and put pressure on its allies – primarily on President Trump.

As for Sudan, the dictator who ruled for several decades, Omar al-Bashir, was overthrown in early 2019. Fearing an increase of Saudi influence in the country, he was very friendly towards rival Turkey. However, the generals who overthrew him and took power were pro-Saudi, which disrupted Turkish-Sudanese relations. Ankara has signed several economic agreements with al-Bashir including an important 99-year lease agreement for Suakin Island. Turkey planned to rebuild the destroyed Ottoman city on the island to turn it into an attractive tourist destination on the Red Sea. However, the aforementioned military leaders who ousted al-Bashir have since put Turkish projects on hold.

The alliance between Turkey and the Libyan Government of National Accord (GNA) has also provoked a backlash from Saudi Arabia and its allies. Turkey's military support for the government in Tripoli concerned regional energy issues, not just ideology or geopolitics. In November 2019, Ankara signed an agreement with the Government of Fayez al-Sarraj to establish an Exclusive Economic Zone (EEZ) that intersects Greek and Cypriot maritime territory and interests.

This decision followed the initiative of Cyprus, Greece, Israel, Italy, Jordan, Egypt, and Palestine in January 2019 to create the EastMed Gas Forum, which was officially established as an international body in January 2020. This forum was formed to turn the Eastern Mediterranean into a major energy hub that exports gas to European markets from Israel, Egypt, and Cyprus. Hence, the Turkish-Libyan agreement was an obvious attempt to block this.

On the other hand, Saudi Arabia has supported field marshal Khalifa Haftar since the beginning of the crisis in Libya. Haftar has strong anti-Islamist views and he was the biggest rival of the Government of National Accord. Riyadh interpreted the Turkish military intervention as a threat to regional security, especially since Libya shares a huge border with Egypt, one of Saudi's biggest allies since 2013. That is why Saudi Arabia threatened to impose sanctions on Turkey several times during that period and held talks with the UAE on "curbing Turkey's expansionist policy."

The religious aspect and perspectives of Saudi-Turkish relations

From all the above, it is clear that the rivalry between Saudi Arabia and Turkey is serious and that great efforts will be needed on both sides to form some sort of alliance. In addition to proxy conflicts and economic competition, to understand the dynamics of the Saudi-Turkish relationship, one should take into account the fact that both countries aspire to a leading position in the religious sphere as well. Even though Saudi Arabia and Turkey are Sunni countries, the versions of Islam they profess are not the same. Turkey’s aspirations, which currently, as stated above, are similar to the ones MB has, do not suit the Saudi Wahhabis at all.

Also, a big stumbling block in reaching a truce, if not the biggest, could be the Islamic Republic of Iran. The 2020 airstrike on the international airport in Baghdad, in which the US killed Iranian General Qasem Soleimani, illustrates best the complicated nature of the relations between the Saudis and the Turks, as well as their desire for domination.

Namely, both of them secretly approved the attack in the hope that it would reduce Iran's influence in the region. However, taking into account the negotiations between Riyadh and Tehran, which started at the beginning of the year and are still ongoing, there is a chance that this will have an extremely negative impact on the fragile Saudi-Turkish relationship. If Iran manages to secure better economic positions through Saudi Arabia and a kind of alliance is formed between them, it will undoubtedly meet with disapproval from Ankara, which is already fighting for influence with both powers in the region.

All in all, it is unlikely that there will be a complete mending of ties between the Saudis and the Turks. This is supported by the fact that they already tried to find a middle ground on the aforementioned issues in 2020 and failed. Nevertheless, the recently launched talks between Turkey and Egypt, and thus indirectly between Riyadh and Ankara, can at least briefly reduce tensions in the region. The recent meetings of Turkish and Sudanese officials to re-establish cooperation between them also speak in favor of the fact that both the Turkish and Saudi sides are ready to lower their guards a little. In any case, now that the Americans are withdrawing from Iraq and the Taliban are in power in Afghanistan, all these negotiations between the Middle Eastern countries will undoubtedly result in some changes in the MENA region.