Relations in the MENA region: Turkey and the UAE 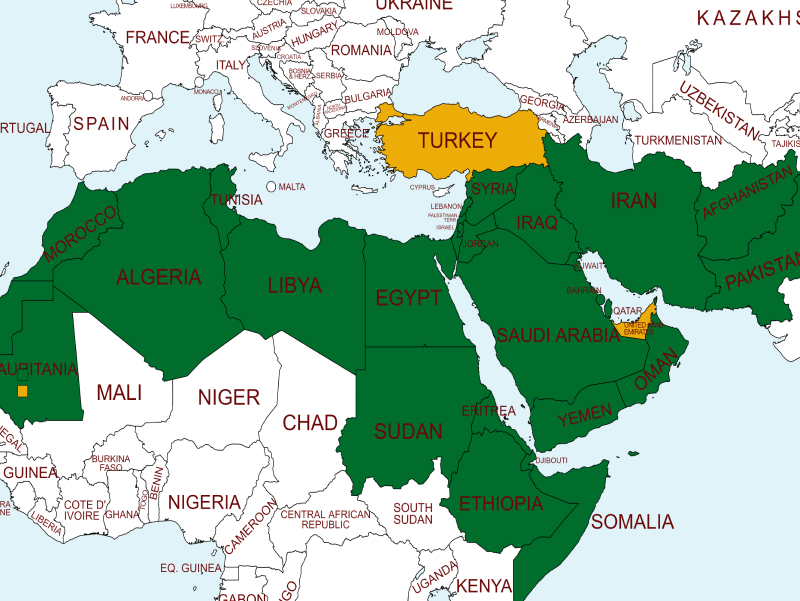 The rivalry between the Republic of Turkey and the United Arab Emirates has been striking for years in numerous proxy conflicts across the MENA region in which they support conflicting actors. Both sides are pursuing expansionist foreign policies aimed at increasing their economic, political and military presence in the region, which is of course the main cause of tensions between them. However, a conciliatory tone has been noticeable in the rhetoric of Turkish and Emirati officials lately, especially during the last few meetings. This pursuit for reconciliation is part of a general effort to normalize relations in the Middle East - a process that has been going on since the beginning of this year, when most countries in the region decided to negotiate with their rivals due to geopolitical changes primarily caused by the US withdrawal from Iraq and Afghanistan.

In August this year, the national security adviser of the United Arab Emirates Sheikh Tahnoun bin Zayed al-Nahyan met with Turkish President Recep Tayyip Erdoğan in Ankara. Among other things, the topics of discussion were the UAE's investment plans in Turkey and important issues for both countries concerning the stability of the region. Some analysts interpret this as a clear sign that there is potential for setting aside their differences and for the beginning of a new chapter in the diplomatic relations between Ankara and Abu Dhabi. However, to understand the probability of a scenario in which these two countries cooperate in the long run, it is necessary to analyze the major events in the MENA region during the past decade.

The reasons for the rift between Turkey and the UAE

The roots of the rivalry between Turkey and the United Arab Emirates trace back to the Arab Spring. The mass demonstrations that shook the region at the time brought to the surface the competitive foreign policies and ideological views of certain regimes. During the revolutions, Ankara supported the changes of government, while Abu Dhabi viewed these disturbances as a serious existential threat to its regime.

Relations between the two countries were almost severed more than once. First, after the overthrow of Muhammad Morsi - a member of the Muslim Brotherhood (MB) - in Egypt in 2013. From that point on until 2016, the UAE did not have an ambassador in Ankara because Turkey kept publicly supporting MB. Abu Dhabi, along with Riyadh, has always been against this Egyptian organization, fearing that it would incite riots on the Arabian Peninsula.

In April 2016, Turkish Foreign Minister Mevlüt Çavuşoğlu visited the UAE and met with Sheikhs Mohamed bin Zayed, Mohammed bin Rashid al-Maktoum and Abdullah bin Zayed. Shortly afterward, in May of the same year, Abu Dhabi appointed Khalifa Shaheen al-Marar as the UAE ambassador in Ankara. However, although it seemed at the time that both sides were ready to overcome disagreements through dialogue, this did not happen. Tensions between Turkey and the UAE re-emerged after July 15, when Abu Dhabi reportedly backed a coup attempt against Erdoğan. Several Turkish outlets even claimed that the United Arab Emirates invested three billion dollars to help carry out the coup.

Further, in October of the same year, the Gulf Cooperation Council (GCC) became the first international organization to declare the Gülen movement a terrorist organization. Although this was a clear gesture of goodwill towards the Turkish government, given that Fethullah Gülen is one of Erdogan's biggest enemies, relations between Turkey and the UAE not only have not improved but, on the contrary, the animosity between them intensified. This is supported by the fact that a few days after the GCC summit, while UAE Foreign Minister Abdullah bin Zayed was on an official visit to Ankara, the Turkish government rejected Zayed's offers of financial investments in exchange for the extradition of MB members, as well as proposals for cooperation in other regional issues.

The GCC rift and the Kurds

The following year, the Qatar diplomatic crisis further increased tensions between Turkey and the UAE. When Riyadh, Abu Dhabi, Manama, and Cairo imposed sanctions on Doha because of its relationship with the MB and Tehran, Ankara naturally positioned itself alongside Qatar. In addition to the fact that Erdoğan supports ideas promoted by the MB, and logically considers Doha an ally, Ankara recognized this situation as an opportunity to defy its biggest regional rival - Saudi Arabia, and along the way the Saudi monarchy's biggest partner, the Emirates. Namely, in response to the blockade, Turkey has increased its military presence in Qatar. Although this was a purely symbolic move, it is clear that Ankara used this crisis to provoke Riyadh and Abu Dhabi.

Parallelly with the Qatar crisis, the events in Syria during that period served as an excuse for both sides to make various accusations against each other in the media. While the UAE has insisted that Turkey tried to undermine the sovereignty of the Syrian state with its military presence, Ankara has accused Abu Dhabi of supporting the Syrian Democratic Forces (SDF). The SDF fought Turkish troops in northern Syria and is largely made up of Kurds and other ethnic groups. In addition, Turkish authorities have blamed the Emirates for supporting the Kurdistan Workers' Party (PKK) - a body that seeks to form an independent Kurdistan, operating in southeastern Turkey and northern Iraq.

Although formal relations between Turkey and the UAE were never completely severed, Abu Dhabi quietly and without pomp withdrew its ambassador from Turkey once again in 2018. The UAE still does not have its envoy in Ankara which speaks in favor of the fact that there has not been much progress in Turkish-Emirati relations since that moment.

Libya has also served as a scene of conflict between the two countries for a while now. Last year's events, when Turkey helped the UN-backed Libyan government prevent Emirati-backed forces from capturing the capital, further contributed to the deepening rift between Ankara and Abu Dhabi. But, as stated at the beginning, Sheikh Tahnun's last visit could start negotiations between Turkey and the UAE again.

An actual or temporary reconciliation?

At the above-mentioned meeting, Erdoğan reacted positively to the UAE's offer to invest in Turkey, although a similar proposal was rejected by Ankara in October 2016, because Abu Dhabi demanded the extradition of MB members. Some interpret this as a clear sign that Turkey is ready to put ideological differences aside, concluding that Turkish foreign policy has less and less Islamist contours. In March this year, Ankara demanded from three Egyptian TV channels based in Istanbul, which propagate the ideas of the MB, to reduce critical reporting on the Egyptian government, which speaks in favor of those estimations. Therefore, it seems that the ideological conflict between Turkey and the UAE may not be such a big obstacle at the moment.

This sudden change of Ankara's ideological discourse is not surprising since the coronavirus pandemic has left – and will leave – drastic consequences on the economies of all countries, and Turkey is no exception. Lately, Erdoğan has been facing increasing criticism precisely because of the bad economic situation in the state, so the huge investments of the UAE can mean a lot to him for collecting political points and silencing the opposition. In this regard, from a long-term perspective, the geopolitical and ideological rivalry between Turkey and the UAE could become more dominant again when the Turkish economy slightly recovers. Hence, it is clear that the current negotiations between Ankara and Abu Dhabi are focused on de-escalating tensions and not on resolving ideological divisions.

Biden's policy over the past year indicates that the US is slowly losing interest in the Middle East, which is creating a vacuum and encouraging regional powers to fill the void. Considering events from the Arab Spring until today and the aspirations of states in this region for dominance, it is unlikely that any alliance between Turkey and the UAE will last in the long run. Outside the economic framework, these two countries do not have many common interests.